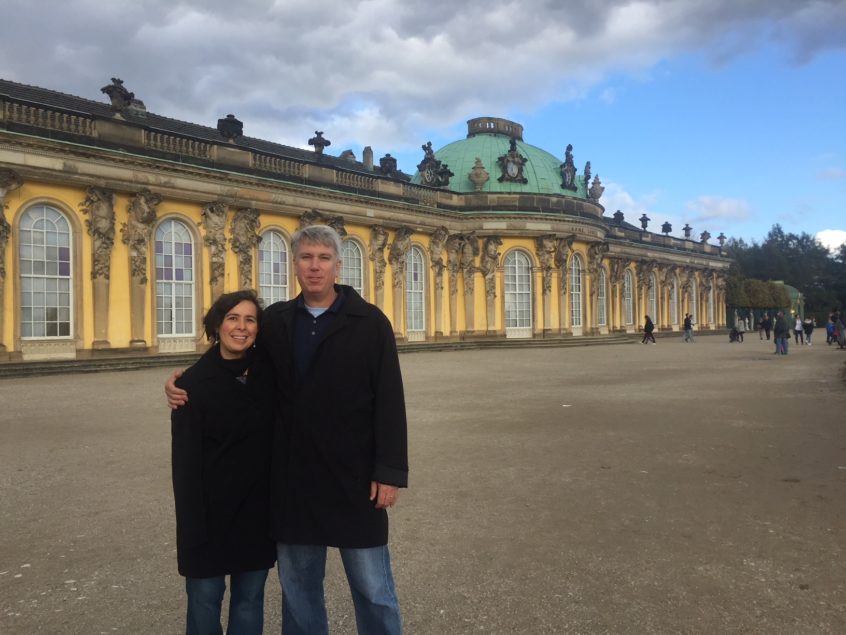 Think about a day when it felt like you were the Biblical guy named Job. One thing after another goes wrong. Probably about the time the third inconceivable event happens, you ask, what is going on?

My sabbatical officially ends after this 20 day trip to Europe and China. Mike and I have an itinerary that consists of a combination of work and leisure. I get to return to Germany after being away for almost 20 years while Mike works in Berlin. Next, we take a train to Prague for a long romantic weekend. Lastly, we fly to Chengdu where I’ll experience China for the first time while Mike meets his Chinese team.

The beginning of the trip goes as planned. The second half of the trip, not so much.

Berlin is beautiful and Prague is charming. Sunday morning, we leave our boutique hotel in Prague to catch a train back to Berlin to catch our flights to China. When we arrive at the train station, we can see our train is delayed. This makes sense as the cab driver talked about some nasty wind storms sweeping across Europe. Delays happen. No problem.

But our delay turns into a cancellation due to downed trees. We don’t learn about this from the arrival board that simply keeps bumping the time to later and later but from checking the German train schedule online.

Ok, we now have a curve ball to deal with.

We try to find the two car rental places at the train station as Berlin is only 4 hours away by car. Heck, Mike and I still have German driver’s licenses from when we lived in Bavaria. This will be fun plus we still have time to make our flights to China if we hurry.

Sadly, one company quotes $300 for a one way drop fee. The other company that we finally locate outside the terminal and across the street, quotes us a $500 drop fee. This pretty much sucks as the actual car rental fee is only $45 per day.

I suggest we call the airlines to see if we can get a cheap flight directly to Amsterdam which is where we’re catching our direct flight to Chengdu tonight. Turns out, we could have gotten airline tickets for $72 per person IF we had booked them last week. But they now cost over $500 per person since it’s the day of departure.

We rent the insanely overpriced rental car and head for the autobahn.

The weather is still rainy and windy but we feel good about how we handled the situation. We see four different rainbows during this drive that brighten the day and cheer us on.

We arrive to Tegel Airport in Berlin almost 3 hours before our flight. Sadly, our plane is delayed and our connection time is tight. We find out when we finally land in Amsterdam that even though our flight does not leave for 15 more minutes, boarding is over and we will not be allowed on the plane. I want to cry.

After waiting in a rescheduling line, we are politely told there are no direct flights the next day. This means not only will we lose a day in China but our 10 hour direct flight will now turn into an 18 hour travel day. Now I want to scream. I consider flying home to the States and calling it quits. I see sadness in Mike’s eyes at this thought so I reconsider.

No good decisions are likely to be made with us both so tired so we head dejectedly to our complimentary hotel room. It’s 11:00 pm by time we fall into our two twin beds on roller wheels that have been pushed together. Mike pulls me over to his side of the bed and holds me tight. It’s been a full challenging day.

Morning arrives the way it always does. I sense the calm below the turbulence of yesterday. I sit down to breakfast and notice the sunrise out the window. I don’t know yet what today will bring but I do know we will eventually make it to China.

Our first flight takes us to Guangzhou. I look out the window as we approach and I see a set of skyscrapers like you would in any large city. Then I see another set. And another. And another. I rub my eyes. There are over a dozen cities within this city. It feels like a science fiction book. I feel like I have arrived on another planet.

Our plane lands and we slowly make it through customs. Unfortunately, our luggage does not come out on the conveyor belt at the baggage claim area. Really? You got to be kidding me. Is there a hidden camera somewhere with a producer saying, wouldn’t it be funny if…

Last night, the airline told us they would forward our baggage to our rescheduled flight and the hotel would give us a travel kit with basic toiletries. At the time, this sounded like a reasonable plan. Now that our bags have obviously gotten lost, I think about how I would do it differently in the future.

Three hours fly by. Communication is an issue. Getting through security is an issue. Time is an issue. I look at my watch, our next flight leaves in 30 minutes. We try our best and even made it all the way back to the baggage area for the second time but this is not going to be enough. I surrender to the reality that our luggage is lost and if we don’t hurry, we’ll miss another flight.

Mike literally takes off running towards our gate which is on the other side of the airport. I follow him but can’t keep his pace. He looks back and I tell him to go hold a place for us in the security line. Sweat is dripping from us as we make it to the empty gate. Fortunately, this time the plane is waiting and we are quickly driven to it. The drive takes over 10 minutes as this airport is ginormous. We arrive to find we are the last passengers to board and the only Caucasians on the flight.

We settle into our empty seats towards the front of the plane. We’re happy we’ve made the flight but we’re anxious that we have no luggage. There’s nothing else we can do so we eat our first Chinese meal on the trip, which is quite satisfying, then fall asleep for the remainder of the flight. We usually do not sleep well on planes but exhaustion is like a magic spell so sleep comes easily.

It’s raining in Chengdu when we land. This is actually good as it will help with the air quality. AQI stand for air quality index. AQI measures the pollutants in the air. 50 or under is considered safe. At home in North Carolina, AQI ranges from 30-40. In Chengdu, 160-180 AQI ranges are typical. 500+ days are not unheard of. It dawns on me I take for granted the clean air and water I have at home.

We head immediately to baggage to report a claim. When we finally talk to someone who understands us, they basically say it’s not their problem and we need to contact the airline from Amsterdam. They reluctantly agree to make copies of our baggage receipts but we later find out no official claim is ever made.

We are taken to our hotel which is 5 stars based on US standards and customer service but at a 3 star price. Our room is on one of the higher floors and the view out our window that spans an entire 25 foot wall is breath taking. It’s after lunch but Mike still has plans of working a full day even though he has been traveling for the last 20 hours. He tells me not to worry about him and that he will aim for being back in the room after a working dinner with his staff. He kisses me goodbye before heading to the office.

I have work of my own to do and locate a customer service number for making an official baggage claim. Amsterdam tells me the lost baggage is not their fault and that the Chinese airline is the one who is responsible for making the claim. I get passed from one person to another. I struggle accepting the fact that nobody is going to claim responsibility. It reminds me of when I used to work at a middle school with 7th and 8th graders. Over an hour elapses and I have only minimal confidence about ever seeing our luggage again.

After hanging up the phone, I pause and reflect. What is going on? Why is this happening?

I frequently tell clients my belief that life is a school of sorts. To see if we have mastered certain lessons, we are given tests. This is my approach to challenges in life.

I think about the small book that I took with me while hiking sections of the Appalachian Trail. It contained basic Buddhist teachings. I liked the fact that they were simple and easy enough for me to condense into a personal mantra: Expect nothing. Embrace everything.

After hours of phone calls by myself, Mike and most importantly, our friend Wei Chengdong who speaks Chinese, our luggage was located. It turns out the airline in Amsterdam did not remove our original baggage tags so when they arrived to Guangzhou, nobody knew what to do. We ended up going 4 full days with the same set of clothes.

I spoke to a delightful young Chinese woman in her 20s who worked in the restaurant part of our hotel the night after our luggage finally arrived. She asked about our trip and I shared that we were from North Carolina traveling to Berlin, Prague and China. Her eyes lit up at the sound of the adventure and two words burst out of her mouth: CRAZY FUN! I laughed as she had no idea about the recent adversity but her phase couldn’t have described the trip more perfectly.

Additionally, while it was challenging, I am also aware our experience is what my daughter Chelsea would call a first world problem. I do not pretend we were ever without food, shelter or safety. For this, I am most grateful.

I’ve asked myself if I would do it again knowing what I know now. And my answer is a resounding yes.

I want more crazy fun as I approach this second half of my life. And this is exactly what happens when we expect nothing and embrace everything. What a wonderful lesson to learn.